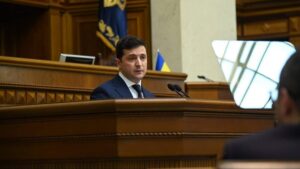 Only such a nation is rich and strong, where everyone

or almost all are wealthy “

It is warm hearts, sincere care for the state of affairs in the country, care for loved ones, for the Motherland that enables us to achieve mutual trust between different segments of the population and branches of government.

At present, the renewed Verkhovna Rada is not working effectively. Despite a large number of parties declaring supposedly special “true ways” of solving social problems, most voters voted for leaders committed to the realization of simple and everlasting expectations and hopes: to live and raise children, have an accommodation, stable income, affordable medical care and so on, and they do not understand why some politicians, both left and right, prefer ideological dogmas to universal values, trying to usurp the right to decide what we, the people, need.

Of course, you, politicians, have the right to your own position, you can unite in opposition. But the time of experimenters has passed, it is impossible to continue to abuse the kindness and patience of the Ukrainian people. Enough!

The world does not understand how millions of working and impoverished people can coexist in the country with hundreds of fabulously rich oligarchs. This contradiction is a confirmation of the blatant injustice that is taking root in our lives. This has never ended well. Proof of this is the movement for justice, which has spread throughout Europe, Asia and even America.

We know that the right slogans or sharp disputes will not provide social protection for people or the rise of production. There are always more people who want to talk about the way to a bright future than those who would actually lead the way. The whole community has to eliminate the lack of effective interaction between all branches of the government. That is why today, members of public organizations appeal to you, to the Ukrainian authorities: “Let us unite around a nationwide idea: Creation of a legal civil society, where the highest value is not an abstract idea, but a living person – the creator of spirituality and the most important productive force.”

We urge the representatives of all branches of government to rise above ambitious and selfish interests in the name of unity of the nation and realization of this great goal. Human solidarity is the most precious heritage of mankind.

Dear members of parliament, You know it best that discord in all branches of government can paralyze any productive work of the Government, damage the investment attractiveness of the country, which leads to even greater impoverishment of the Ukrainian people.

Confrontation in parliament can negatively affect the general state of society, cause social and regional conflicts.

There are no people who do not make mistakes, but there are people who are afraid to admit their mistakes. Parliamentary games of tug-of-war and wars of compromising materials are violence against the public consciousness and perpetuate the common notion that politics is all about dirt and deception.

Do not turn our policy into a field of secret and overt conspiracies!

Politics is an art. First of all – the art of compromise! We ask you, we command you – do not turn the highest legislative body of the state into a source of destabilization of society.

The Ukrainian people hope that society will be led by forces that do good and be the strong government that will protect, support and develop these forces in the interests of each individual and the state as a whole.

After 30 years of Independence, it should be stated that a criminal-oligarchic state has been built in Ukraine, the main purpose of which is to rob the people in favor of several dozen families.

The formation and development of a competitive Ukrainian nation require an effective state, a new system of state power and local self-government, as well as the introduction of a new social and economic model that ensures sustainable human development based on modern standards of quality of life.

We believe that you will have enough intelligence and respect for your people to end the immediate confrontation and start creating a legal civil society with us.

People speak! To amend the Constitution with provisions for the implementation of the Minsk agreement and stop the war in eastern Ukraine. We are always with you !!!

We say: UKRAINE WILL BE UNITED!