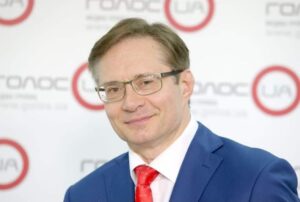 In the flow of everyday life in Ukraine, the event that took place at the end of October 2021 did not cause much excitement and did not even make it into the important news feed. However, many people interested in the social and political life of Ukraine drew attention to it. It was at the end of October this year that the chairman of the All-Ukrainian public organization “Union of Public Organizations of Ukraine” NARODNA RADA ” a well-known public figure in Ukraine, academician and first vice-president of the Academy of Economic Sciences of Ukraine Anatoly Peshko was elected. It is important to note that it is the “NARODNA RADA” that for many years has been uniting such significant public formations in Ukraine as the International Committee for the Protection of Human Rights, the “Union of Chernobyl Workers”, “Veterans of the Internal Affairs Bodies”, the “KHRAN” society, the All-Ukrainian the Pravozakhist Foundation, the Institute for Strategic Studies of the Shadow Economy and Corruption, the Beregi NGO and about 4,000 other public formations. Heading the “PEOPLE’S RADA” Academician Anatoly Peshko, previously elected leader of the Ukrainian Cossack Party, has significantly strengthened his rather solid authority as a well-known public figure of an all-Ukrainian scale.

Anatoly Peshko has repeatedly attracted the attention of several well-known political parties in Ukraine before. However, for a long time Academician A. V. Peshko concentrated his activities exclusively in the sphere of the country’s social and political life, often in the direction of purely educational work.

His conclusions and comments on the strategic directions of development of the Ukrainian economy, his advice and comments on the ways and possible options for overcoming the systemic crisis, in the grip of which Ukrainian society has been living for many years, attract the attention of not only professional politicians, economists, heads of large and medium-sized businesses, but also many local councilors at all levels. For many years Anatoly Peshko was known for his commitment and active participation in the work International public organization “International Academy of Cossacks” – one of the most active members of “PEOPLE’S RADI”. Well, the election of Anatoly Peshko as chairman of the Cossack Ukrainian Party is not so much an indicator of the political ambitions of an academician and a prominent public and political figure, but an expression of the desire and attempts of certain political forces to expand and strengthen their electoral base and reinforce their intentions in the political life of the Ukrainian state.Moreover, just today Ukraine once again faced the need to make significant changes and adjustments in the process of its further development. As the experience of the past decade shows, only desires and declarations for a reformatory renewal of the country are not enough to achieve at least visible shifts for the better in the life of the majority of Ukrainians. We need professionally trained specialists, experienced over the years of fruitful and successful work – practitioners with experience, knowledge, inspiration and, of course, powerful support in the environment of civil society in Ukraine.  Anatoly Peshko is just one of those who meet most of the criteria for a modern politician and statesman. A striking example of such support and recognition of A.V. Peshko among the civil society of Ukraine is the decision of the All-Ukrainian public organization “Union of Public Organizations of Ukraine” NARODNA RADA “dated October 12, 2021 to award Anatoly Peshko with the sign of national recognition -” Golden Star “of the Hero of the Ukrainian people   The award is deeply symbolic and significant, since the merits of Academician A.V. Peshko, his courageous, outspoken civic position and many years of charitable activity have received comprehensive recognition from representatives of more than 4 thousand public organizations, movements and associations, which today are part of the All-Union Public Organization Union of Public Organizations “PEOPLE’S RADA”. Even many politicians at the state level do not have such support, which Anatoly Peshko enjoys among public figures who organically represent different social strata of society and are regionally present in all corners of our state. And that series of events in the social and political life of Ukraine,  which took place this fall and to which Academician Anatoly Peshko is directly involved, may mean and indicate important changes that Ukraine and the long-suffering Ukrainian people have long been waiting for. It is only important to note and at the same time to emphasize: there is almost no time left to wait. We need action, we need changes, we need real patriots who can improve the situation in Ukraine for the better. Moreover, in a historically short time.

Nadezhda LUKASHEVICH, Chairman of the Board of the Union of Public Organizations “NARODNA RADA”.