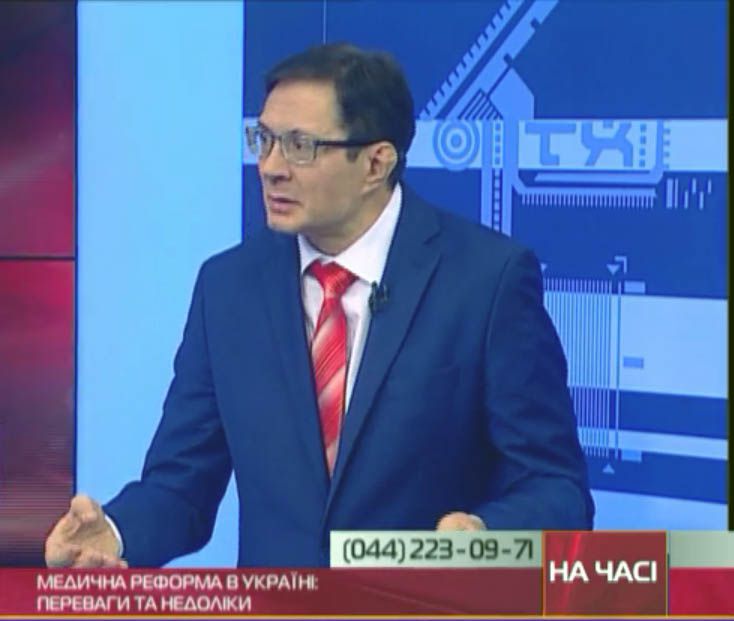 2. Maybe health care reform has ensured the timely delivery of the patient to the doctor? Or did you provide optimal logistics in the medical care system? Maybe, thanks to the reform, it is possible to deliver a woman with uterine bleeding or ectopic pregnancy, ovarian apoplexy in time, which requires immediate surgical assistance to immediately stop the bleeding and save the patient’s life? But for this it was necessary to have time to asphalt all rural roads or buy helicopters for each Central district hospital, at least 5-10 PCs.! But in fact, all the roads in the countryside are destroyed, as after the bombing, and sighting. Ambulances are not enough, gasoline too. With medical personnel-a big problem. Many hospitals lack doctors and nurses.

3. Maybe Ukraine has dramatically improved the system of training of medical personnel? Maybe medical universities and medical schools began to prepare more qualified doctors and nurses? But, unfortunately, the situation in the medical education system has not improved, but has deteriorated dramatically. This is due, firstly, to the commercialization of medical education, that is, the Institute receives and pass exams for money. Secondly, in medical universities there are almost no highly qualified and experienced assistants, associate professors and professors (salaries are low, corruption thrives). Let’s face it, there are no more than 30% of experienced staff doctors left. Continuity in the system of medical education has already been lost. Who will prepare new staff is a difficult and depressing question.

4. Maybe the Ministry of health has created the Department of sanitary and anti-epidemic care, which carries out systematic work on vaccination of citizens of Ukraine, as well as systematic work on disinfection of numerous foci of various particularly dangerous infections? Unfortunately,this is also not! Maybe Ukraine has changed the system of procurement of medicines, which purchased high-quality, effective and affordable medicines that solve the problem of providing the population of Ukraine with affordable drugs and vaccines? Unfortunately, this is not! Maybe we have created a system of procurement of medicines, which overcame corruption and embezzlement of budget funds? Unfortunately, we have to admit that we have created a monster that bypasses the Ukrainian regulatory services and law enforcement agencies to purchase all drugs on a non-alternative basis, outside the Ukrainian state. At the same time, a lot of money is being stolen by British and American companies, allegedly supplying Ukraine with most of the various vaccines and medicines. The national health service of Ukraine is a body for centralized and uncontrolled plundering of budgetary funds.

5. Health authorities promised huge salaries to doctors, nurses and other medical staff. The result is terrifying-doctors ‘ salaries are at the level of 3-4 thousand UAH per month. The situation is even worse for nurses and orderlies.

6. Statements of the acting Minister U. Suprun that money will go for the patient, created enormous confusion in system of adequacy of distribution of means between various medical institutions (for example, the patient from the village chose to himself the family doctor in the Central regional hospital, and out-patient treatment will take place in other rural out-patient clinic, in a residence). Who and how will distribute this meager (walking) money?

And now the main thing: the reason for all the troubles is that no new health system has been created. Only the existing, quite adequate health care system has collapsed.

There are two reasons for the collapse: 1) scanty financing of the health care system of Ukraine: in 2019, 92 billion UAH were allocated, while the minimum need should be 6% of the country’s GDP, that is, it should be at least 230 billion UAH, but this is already in the current, collapsed Ukraine. But if we conduct a more or less adequate calculation, then 6% should not be considered from $ 120 billion. Ukraine’s GDP, and from the previous GDP, which had Ukraine in 2013, that is at the level of 240 billion dollars. Thus, an adequate amount for the financing of Ukrainian health care should be an amount of at least 440 billion UAH, and the state has bothered to allocate only 92-95 billion UAH, of which at least 50-70% are stolen! And now, dear Ukrainians, think for yourself why more than 100 thousand doctors and nurses have left Ukraine. Why is the health care system not adequately funded? Why this system doesn’t provide parity and physically-, and medically-reasonable distribution of all budgetary funds between medical institutions of the country from Kiev to the most remote rural out-patient clinic?

7. The elimination of the system of emergency and emergency medical care, which is carried out by the current acting Minister U. Suprun, has led to severe consequences, which consist in the fact that people with various infectious diseases, including particularly dangerous infections, such as diphtheria, viral meningitis, tuberculosis, etc., which are spread by airborne droplets (with normal breathing of the patient) already infect a huge number of our fellow citizens who today get to the hospital on their own (in the bus, subway, trolley), and are not delivered to the hospital ambulance. In the same way, severe infectious diseases transmitted by the fecal-oral route (viral hepatitis a, dysentery, cholera, etc.) are spread.
It should be noted that in all infectious diseases departments of large hospitals throughout the country and the city of Kiev there are 3-5 reception departments, so that patients with different types of infections do not intersect with each other, even in the same room. Such precautions have been developed in our health care system not by accident. This made it possible to prevent the spread of various serious infectious diseases among residents of cities and other settlements, as well as among patients themselves infectious departments and infectious diseases hospitals. In the very same infectious diseases hospitals, patients with different pathologies were also treated in specially designated for different infections wards, often individual, with a separate entrance from the street to each ward!

8. Under the current “medical reform”, the family doctor has to serve at least 2,000 patients per year. And now count for yourself, because the doctor’s working day is 8 hours a day with a 5 — day working week (40 hours a week). 160 hours a month. Multiplied by 11 months (1 month vacation) is equal to 1 760 hours per year. That is, we see that the doctor is not even physically able to give each patient even 1 hour a year. And in order to make a primary examination of the patient with the newly diagnosed disease, or exacerbation of chronic disease, the doctor needs at least 40 minutes. If the disease is not any complex and rare. Thus, it can be seen that the process of treatment of the patient in the case of even banal viral infection, the patient must be examined at least 2-3 times within two weeks of the disease. That is, it is seen that to treat even a simple viral or bacterial infection (flu, Rhino-intitially infection, sore throat) doctor you need to spend on one patient, at least 1.5-2 hours. To treat more serious diseases, for example, ischemic heart disease with cardiac arrhythmias or chronic enterocolitis, or ulcerative disease stomach and duodenal ulcers, pneumonia (focal or confluent), or pleuropneumonia with a lunge into the cavity of the lung. For the treatment of such diseases, the doctor needs much more time, as a rule, this time will be calculated not for hours, but for days and months. So you understand that even theoretically, not that the real family doctor can not afford to serve 2,000 patients. This is another fact, testifying to the complete unprofessional and profanity of madreporarian!

9. And now about the so-called telemedicine and medical treatment by phone: in the existing system, a doctor who would treat his patient by phone, which usually leads to complications in patients with various diseases or to their death, would face criminal punishment with imprisonment from 2 to 5 years and deprivation of the right to engage in medical work with the withdrawal of a diploma of higher medical education. Telemedicine also does not allow an objective assessment of the patient’s condition and prescribe the correct treatment, if on another monitor and video camera there is no experienced and professional doctor who can assess the patient’s condition not only visually, but also to conduct a physical examination (examination, palpation, percussion, auscultation). If there is a paramedic or a nurse near the patient, they will not be able to objectively assess whether the patient under study has tonic tension of the muscles of the anterior abdominal wall (acute abdomen), which indicates an acute surgical pathology in the abdominal cavity. This can lead to the wrong diagnosis and, accordingly, the death of the patient!

I gave an incomplete list of objective facts and information that literally on the move indicate the absurdity of the idea of treating patients on the phone or through the monitor screen.

All of the above problems are artificially induced. The current medical reform has nothing to do with the treatment of our citizens!