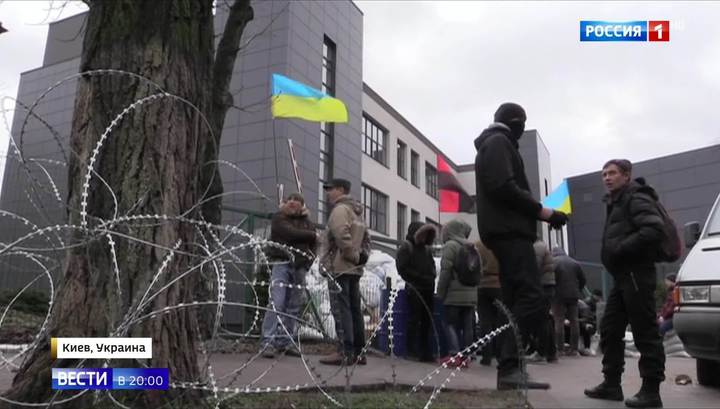 In Kiev radicals have a day to block the office of the TV channel NewsOne. Journalists are not allowed in or out of the building, and the leadership of the channel is required to apologize and stop Pro-Russian propaganda, which, apparently, is that NewsOne covers the opposition, and its owner has his own view of the events on the Maidan. The channel went to the police and the President. But the first didn’t see violations, and the second gently hinted that journalists are guilty.

Industrial zone on the outskirts of Kiev. The territory of NewsOne channel. On approaches to edition-barricades in the spirit of “Euromaidan”: anti-tank hedgehogs, barrels with fire, bags with sand and a barbed wire. Journalists are not allowed out of the building, the police do not interfere. Protesters in camouflage warn that if the TV channel will continue to show all that is happening in Ukraine, it will burn. Will burn the same way as once burned Ukrainian TV channel “inter”.

The General Director of the channel Yevgeny Muraev threatened with punishment for what he calls “Euromaidan” coup. Demand an apology — while Moore did not repeat the fate of his colleague from “Perche”, who was beaten in his own office. And not to show that show is not allowed and those not allowed.

Nationalists in balaclavas did not like that NewsOne broadcast a rally “for impeachment to the President”, which the day before gathered in the center of Kiev several thousand people. Other Ukrainian media simply ignored this protest. None of the TV channels showed it.

The fact that the information space should be monitored (and vigilantly!) said in his blog, Petro Poroshenko. But the extra information on the air is also not needed. He is even against the blockade of the TV channel building. We need other methods of struggle. ” The national Council for television and radio broadcasting should more effectively regulate the media space, ” Petro Poroshenko said.

Experts and analysts have already called this action a test of freedom of speech, which the Kiev authorities once again failed. “The current government is very nervous and even more unnerving Pro — American and Pro-European curators, because Ukraine is essentially under external control and, of course, for them is extremely negative if the people begin to understand what is really happening,” – says political scientist Anatoly Peshko.

Another requirement of the radicals who blocked NewsOne TV channel is to fire journalist Ruslan Kotsaba, who leads his author’s analytical program in Prime time (too high ratings of the talk show). For statements that in Ukraine — civil war, the journalist 1,5 years stayed in prison, it repeatedly beat on the street, threatened a family.