Anatoly Peshko was awarded the Order of Christ the Savior. 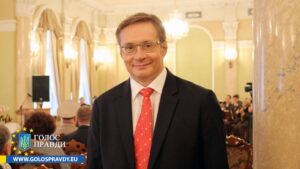 The news that Anatoly Peshko, a well-known scientist in Ukraine, a public figure, the head of a powerful agricultural production company, was awarded the Order of Christ the Savior, became an absolutely logical and adequate reaction of Ukrainian society to the selfless activity and victorious work of Academician Anatoliy Peshko. It should be noted that the life path of Anatoly Vladimirovich was crowned with a large number of high state insignia. Anatoly Peshko had even more successes and merits in the field of scientific activity, where his expert thought, deeply and comprehensively reasoned conclusions, often served as guidelines and preceded significant scientific discoveries.

At the same time, Academician A.V. Peshko never forgot about those who find it most difficult and who cannot always feel parental affection, maternal love and the comfort of their home. He felt and has a constant desire to help orphans, but he also does not bypass the opportunity to help geriatric institutions, where elderly people live out their age. And that is why he is very well known and sincerely loved in one of the children’s boarding schools in his hometown of Korostyshev in the Zhytomyr region, in the Zhytomyr regional baby house, in the largest geriatric boarding house in the Zhytomyr region.

At a time when social passions are raging in Ukraine, when political battles have been raging for years, the call for understanding and compromise, sounding from the current head of the largest public association in Ukraine, Narodnaya Rada, Anatoly Peshko, sounds like a call from the lips of unconditional moral authority. It is for the merits and tireless activity in the search for a public compromise, national unity, in the revival of the spirituality of Ukrainian society, as well as attempts to establish a local Orthodox Church in Ukraine, Patriarch of Kiev and All Russia-Ukraine Filaret awarded Academician Anatoly Peshko as a scientist, as a successful entrepreneur-manufacturer and especially as a public figure, constantly and systematically lending a helping hand and extending a hand of salvation to hundreds and thousands of his compatriots.

The news of awarding the Order of Christ the Savior greatly excited Anatoly Peshko. As a virtuous citizen of his state, as a faithful son of his people and as a tireless servant of his native land, Academician A.V. Peshko is sincerely grateful to the rectors of the UOC-KP and Patriarch Filaret. As always and in everything, Anatoly Vladimirovich is a cheerful and optimist. With such people, Ukraine is definitely doomed to success and victory.