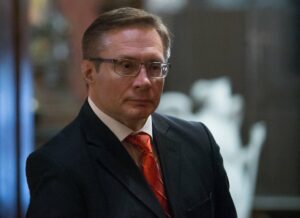 Academician Anatoly Peshko was awarded a Diploma of the Verkhovna Rada “For Services to the Ukrainian people”. This is reported in the parliamentary publication “Voice of Ukraine”.

As noted, the news that Anatoly Peshko was awarded a Diploma of the Verkhovna Rada of Ukraine “For Services to the Ukrainian people” did not come as a surprise.

In general, Anatoly Peshko does not have to be presented for too long as a candidate for a high parliamentary award. Throughout the three decades of the restoration of the state independence of Ukraine, Anatoly Peshko has always been in the thick of the most important social events in the life of our state. Anatoly Peshko, a doctor-scientist who successfully started his rapid path in domestic medicine, quickly and purposefully delved into the processes of building a young Ukrainian state and just as quickly mastered all aspects of the development of the Ukrainian economy without exception. Exceptional efficiency, unique scientific erudition, the ability and desire to quickly implement scientific inventions and discoveries in the practice of economic and economic mechanisms, brought Anatoly Peshko a well-deserved authority and recognition among well-known professionals of domestic economic science and business executives.

Another feature of A. Peshko’s character is courage in defending his own beliefs, honesty and integrity in developing a strategy for the development of Ukraine in the most dramatic years of its recent state history. Anatoly Peshko was never afraid to talk about what others felt, but did not dare to express it. Moreover, he has always possessed and still has not lost the rare ability to clearly, figuratively, intelligibly and convincingly express his opinion, and assessments and economic analysis from the mouth of Academician A. Peshko are always distinguished by constructivism, carry effective specifics and scientific argumentation. Academician Anatoly Peshko has never been limited only to theoretical issues of economic science. He is a successful and experienced practitioner, an innovator and a talented manager-organizer in several important economic and economic projects. For almost a decade, Anatoly Peshko has been successfully working as an exclusively professional manager in the field of agribusiness.

Anatoly Peshko’s deep, scientifically based and repeatedly proven professionalism of successful economic decisions is organically combined with his moral principles, where there is always respect for elders, where attention to each of his colleagues or his subordinates is mandatory. Anatoly Peshko’s unequivocally dominant moral imperative and life credo is his charitable activities and long-term patronage of social protection institutions and children’s boarding schools. First of all, in his native Zhytomyr region. As a father, as an experienced leader and as a public activist, Anatoly Peshko never forgets about the needs of the poor, about orphaned children and always provides them with all possible assistance. Therefore, the parliamentary award “For Services to the Ukrainian People” is an exceptionally fair, timely and worthy of the vital efforts of A. Peshko, with which he should be sincerely and cordially congratulated.

Bogdan Andrushkiv, President of the Academy of Social Management of Ukraine, Doctor of Economics, Professor;

Raisa Nedashkovskaya, People’s Artist of Ukraine, Knight of the Order of Princess Olga I, II, III degrees, Deputy Chairman of the National Union of Theater Workers of Ukraine;