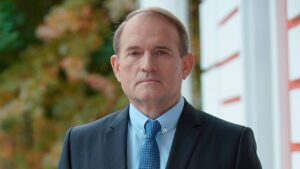 A number of Ukrainian cultural, public figures and scientists have written open letters to the chairman of the political council of the Opposition Platform-For Life, People’s Deputy Viktor Medvedchuk, asking him to make every effort to continue the negotiation process with representatives of the ORDLO and release the four detained Ukrainians. They published the corresponding appeals on their Facebook pages.

The cultural figures who signed the letter, including well-known artists Vladimir Bystryakov, Lyubov Titarenko, Vladimir Danilets and Vladimir Moiseenko, as well as the head of the public organization SCM Alexander Potemkin, stated that the current government in recent months has not taken any steps to speed up the process of releasing the detained persons. On the contrary, representatives of the subgroups in the TCG have repeatedly complained that the Ukrainian side is slowing down the negotiation process.

“We are concerned about the indifference of many statesmen to this problem, because we are talking about ordinary citizens who should protect the state. We are outraged by the rhetoric of the war party politicians who want to slow down this liberation. We understand that in the conditions of political confrontation, a stream of information dirt, slander and threats is flying at you personally, but we hope that this will not stop your will to resolve the conflict in the Donbas, to achieve peace and restore the state borders of Ukraine. We have learned that we are talking about four women, so you, as a noble knight, will not be able to stay away from their return from captivity to their homeland. Do not listen to threats, slander and lies, they will never tarnish the important work that you are doing for Ukraine. We are with you, so help you God! He sees who gives their love and strength to Ukraine, and who only covers their black deeds with patriotism. Remember-ordinary citizens of Ukraine are always for you, because they do not need any war, no captivity, no fire in the country,” the letter says. 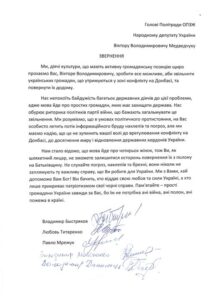 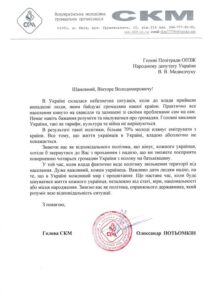 In turn, the first Vice-President of Academy of economic Sciences of Ukraine Anatoliy Peshko recalled that representatives ORDO trust Victor Medvedchuk much more than the current government.

“Evidence of this is the proposal of the LDPR to transfer a group of detained persons to Ukraine with your mediation. We are talking about women, the elderly and people suffering from serious illnesses. Ukraine is obliged to return its citizens home. In the conditions of complete political impotence of the current government, do not ignore the numerous appeals of the relatives of the prisoners. You have always offered to exchange “all for all” and said that the Russian Federation agrees with this. Now we have a chance to return people unilaterally. The Ukrainian authorities, represented by Leonid Kravchuk, have already indicated that they will oppose the transfer of the detained persons to you. Moreover, they propose to resolve the issue “at the interstate level”, thus recognizing the ORDLO as independent states. This is either unprofessionalism or criminal activity, for which the authorities have yet to be held accountable. But now the main thing is the fate of people, ” Peshko said.