Academician Peshko – to President Zelensky: In Ukraine a large-scale land scam is being prepared

Academician Peshko – to President Zelensky: In Ukraine a large-scale land scam is being prepared

Academician Peshko – to President Zelensky: In Ukraine a large-scale land scam is being prepared
Academician and first Vice-President of the Academy of Economic Sciences of Ukraine Anatoly Peshko addressed a letter to President Vladimir Zelensky, in which he points out the risks and opportunities that Ukraine faces 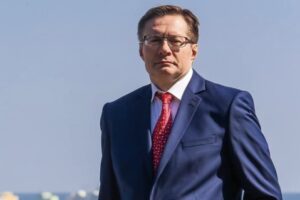 To the President of Ukraine Zelensky V. A.

I was forced to address you with great concern for the future of our Ukrainian people, our children and grandchildren. As a result of the deliberately erroneous malicious and even criminal transformation plans imposed on Ukraine in the agro-industrial sector of Ukraine, an irreversible tragedy may occur in three months.

Since the transfer of state lands (OTG), the following criminal acts have occurred on the part of state officials of Ukraine:

The lands transferred to the OTG were distributed among the participants of the anti-terrorist operation, but, as it turned out, almost all regions of Ukraine have the same names and passports of the same atoshnikov. I.e., according to the law of Ukraine, citizens of Ukraine have the right to receive 2 hectares of land only once for each citizen of Ukraine who has lived in Ukraine for at least the last 10 years and no more. In addition, the land was allocated to the same persons, participants of the anti-terrorist operation, Afghans, Chernobyl victims and other persons who have certain state benefits. It is characteristic that immediately after receiving the allocated land according to the documents, these lands were resold under notarial powers of attorney to a narrow circle of persons directly or indirectly related to a significant number of Ukrainian oligarchs. Moreover, the sale of land was carried out at prices of 300-500 dollars per 1 ha, i.e., almost for nothing. Thus, in Ukraine, state land has already been stolen from 7-1() million hectares out of the 11.4 million hectares of state-owned land available in Ukraine at the end of the 90s.

These Ukrainian lands can still be returned to the state, provided that you postpone the date of entry into force of the law “On the sale of Foreign Land”. Otherwise, these lands will be sold to the world’s foreign owners – the world’s financial oligarchs at European prices, and Ukraine will lose all its valuable state land, the value of which, according to the most conservative estimates, is about $ 700 billion – to lose forever.

That is, a scam will be committed – a theft that has no analogues in the world for the entire 19th, 20th, or 21st century.

I earnestly ask you to meet with me so that I can give you absolutely truthful and objective information about how to stop this impending catastrophe and, on the contrary, use this state land for a lightning-fast recovery of the Ukrainian economy!

As an example, I give you a small calculation: in Ukraine, now conscientious tenants pay rent on the hands of people (9 thousand UAH. for 1.8 hectares of land). If you calculate this rent taking into account the taxes that are paid to the state from this rent, namely 18% – income tax, 1.5% – military duty, 20 % – VAT (already paid from the sale of this agricultural product for the payment of rent by the landlord). In addition to 9 thousand UAH of rent, taxes on this amount paid to the state amount to 3555 UAH. in total, the rent for the agricultural producer is 12 555 UAH. Divide this by the dollar exchange rate ( on average 28 UAH/USD) – this is 448 dollars for 1.8 ha, on average. I.e., this is 249-250 dollars for 1 ha. Such rents are paid only in Germany , the richest country in Europe.

If the Ukrainian state leases the land at its disposal (11 million hectares), land that has been stolen, but stolen so far only according to documents, only to Ukrainian tenants at such a rent, then we will receive an annual net income of 2 billion rubles. $ 750 million. this is what Ukraine can get from leasing land to Ukrainian producers. Ideally, we can attract foreign investors to Ukraine and I can be a guarantor of the implementation of this program. At the same time, the rental price will be at least $ 250 per hectare, and in addition, under the lease agreement, a foreign tenant will be required to invest money in the development of irrigated agriculture on 100% of the leased land, as well as on the condition that for each hectare of leased land, a foreign tenant will be required to revive meat and dairy production at the rate of 1 head of cattle per 1 hectare of land.

to build an irrigation system, a foreign investor will have to invest at least 10-12 thousand dollars per 1 ha of Ukrainian land, which in terms of 10 million hectares of state land will amount to 100-120 billion dollars of irrevocable investments made on Ukrainian land;
with the development of meat and dairy livestock, to create modern production of this type, the investor will be required to invest at least 30 thousand dollars to create conditions for growing , keeping cows, milking them, collecting, cooling and storing milk for further processing. Only direct investments under this program will amount to 30 thousand dollars per 1 cow x 10 million hectares = 300 000 000 000 dollars. these are absolutely real figures.
Thus, Ukraine will receive annually from 2, 5 billion dollars to 3 billion dollars of net rent – net revenues to the state budget plus Ukraine’s GDP, only due to direct investment will increase by 420 billion dollars and reach the level of 540 billion dollars and above. That is, in two years, Ukraine will receive 500%, and maybe more, GDP growth. At the same time, Ukraine absolutely does not need any loans that drive our country and people into bondage, destroying the prospect of Ukrainian statehood.

It should be remembered that the entry into the country of an amount equal to 420 billion dollars or more will stimulate the infrastructure of these agro-industrial facilities, which will inevitably cause a huge demand for the products of Ukrainian metallurgy, Ukrainian industrial engineering, increase Ukraine’s need for electricity, a strong growth of the construction industry, as well as the growth of the industry of deep processing of agricultural products. In Ukraine, there will be a boom in production and construction materials, demand for machine-building products for agriculture and processing of its products, which will inevitably lead to an increase in demand for iron ore products of GOKs, products of metallurgical and ferroalloy plants, products of chemical industry giants that produce fertilizers for agriculture.

The growth of the above-mentioned industries will contribute to the growth of wages, which means the return of highly qualified specialists from abroad to the country. All this will cause an increase in domestic demand for goods and services and an increase in effective demand within the country will cause, respectively, growth in other sectors of the national economy of Ukraine, such as light industry, production of building materials, the revival of the service sector,  etc.

All these processes will contribute to the increase and real filling of the budget of Ukraine, which will allow the state to finance other priority sectors of the economy: rocket construction, aircraft construction and modern instrument making. But for all the above-mentioned industries, it is necessary to remember the need for parallel and priority growth of the electric power industry, without which industrial production is impossible. to solve this problem, I also have programs.

Ukraine needs to develop a high-quality healthcare system not only to stop the development of Covid-19, but also to develop a powerful sanitary anti-epidemic service. Because in the near future, Ukraine and other countries of the world expect more terrible shocks associated with the deliberate spread of various infectious viral, as well as bacterial and fungal diseases; attempts to spread deadly genetic diseases through the supposedly voluntary vaccination system are not excluded (this danger should also be remembered).

Along with recipes for solving economic and social problems, I have recipes for solving political pain points in our country. This applies to the Donbas and other uncontrolled territories of Ukraine. These questions are confidential and I will be able to voice them at private meetings one-on-one.

With deep respect and hope for mutual understanding, hope for a joint solution to the global problems of Ukraine, sincerely your friend, academician and First Vice-President of the Academy of Economic Sciences of Ukraine Anatoly Peshko.